Telos team members Marina and Carly, based in our Jaffa office, reflect on and share their experiences at the recent and ongoing protests across Israel demanding Netanyahu’s resignation from office.

“Democracy for all.” Our throats are dry from the shouting, but the continuous loop of chants and drums won’t fall silent. It’s late, past midnight, and we are still thousands of people gathered at Balfour Street in front of Prime Minister Netanyahu’s residence in downtown Jerusalem. The protesting crowd is surrounded by hundreds of policemen. We know well that the situation can escalate any minute. But it’s not the time to give up. After three weeks of consistent and growing protests we are physically exhausted but spiritually energized. 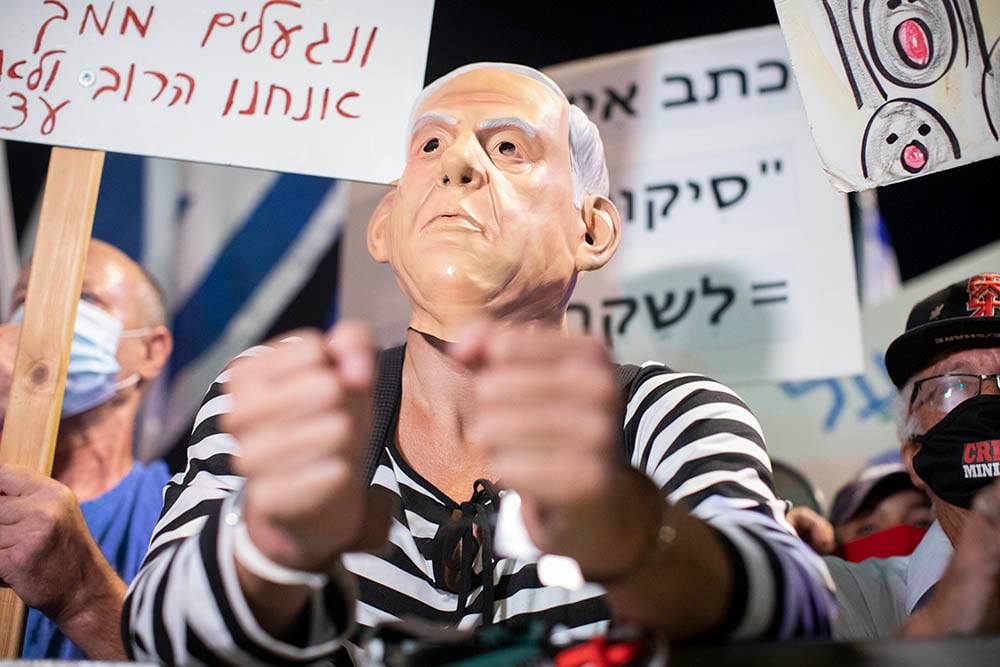 For months, Israelis have been taking their frustration to the streets. The list of accusations is long: the mismanagement of the government as a response to the Corona crisis, economic distress, a corrupt prime minister in an unjust political system, annexation plans, police brutality. And while protests in Israel are very common, they are also known to remain within specific demographics. Yet, nowadays people who’ve historically been divided on a range of political issues or have not been politically active at all are united by one common denominator: nothing in this country can move forward until Netanyahu resigns.

Unable to get the demonstration under control, the police began using excessive violence. Protestors were trapped while the police blocked all exits, spraying us with water cannons and arresting dozens. Hundreds of peaceful demonstrators, incl 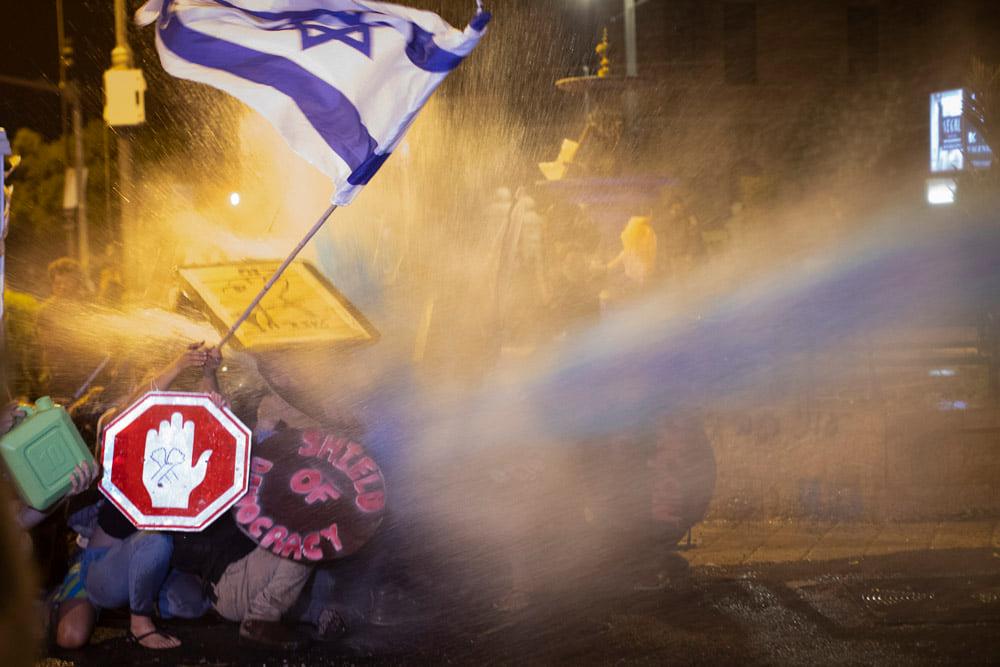 uding ourselves, faced physical violence. Compared to Palestinians who are regularly confronted with violence from Israeli authorities during demonstrations, the disproportionate police brutality against its civilians came as a shock to the Israeli protesting majority. The massive protest on ‘Bastille day’ in some way served a catalyst to what we’re seeing today. The events of this night have subsequently brought more and more people to the streets; people who are unafraid and determined to make their voices heard.

These days, the protests feel somewhere between street festivals and revolts: chants and drumming echo all over the place, families with dogs stroll around, people in spider man and mermaid costumes with bubbles and burning sage, signs that say “hope” and protestors handing out flowers. Dozens are sitting on the ground with their eyes closed in silent meditation. There is no central leadership, no political organization and no speeches, and this is where its power lies: it is a revolution made and fully choreographed by its people. No one knows what will happen tomorrow, or even in the next hour. The traditional lines between the political “left” and “right” blur and are being constantly re-negotiated. The energy is one of, “We are stronger together!”

One slogan that can be heard in every demonstration is “Justice for Iyad!” In May, Iyad Al-Halaq, a young Palestinian man with autism was brutally killed by Israeli police forces in the old city of Jerusalem. Out of fear, he ran to hide behind a garbage bin near Lion’s Gate. But even after his caretaker shouted that Iyad lived with autism, he received seven bullets in his body. While his death sparked a wave of protests against police brutality among Palestinian solidarity activists, until recently a large number of Israelis had never heard of Iyad. But the current protests are opening up a new space for these voices that so far have been labelled as outcasts: ‘Justice for Iyad’ is a demand suddenly accepted and chanted among the large crowd.

Will these protests be a turning point towards a more just Israeli society, across divisions and ethnic lines? What does all of this mean for the millions of Palestinians living their lives under military occupation? We don’t yet know. But following John Lewis’ words in his posthumous essay, “Democracy is not a state. It is an act, and each generation must do its part to help build what we called the Beloved Community, a nation and world society at peace with itself.” We are here to do ours.