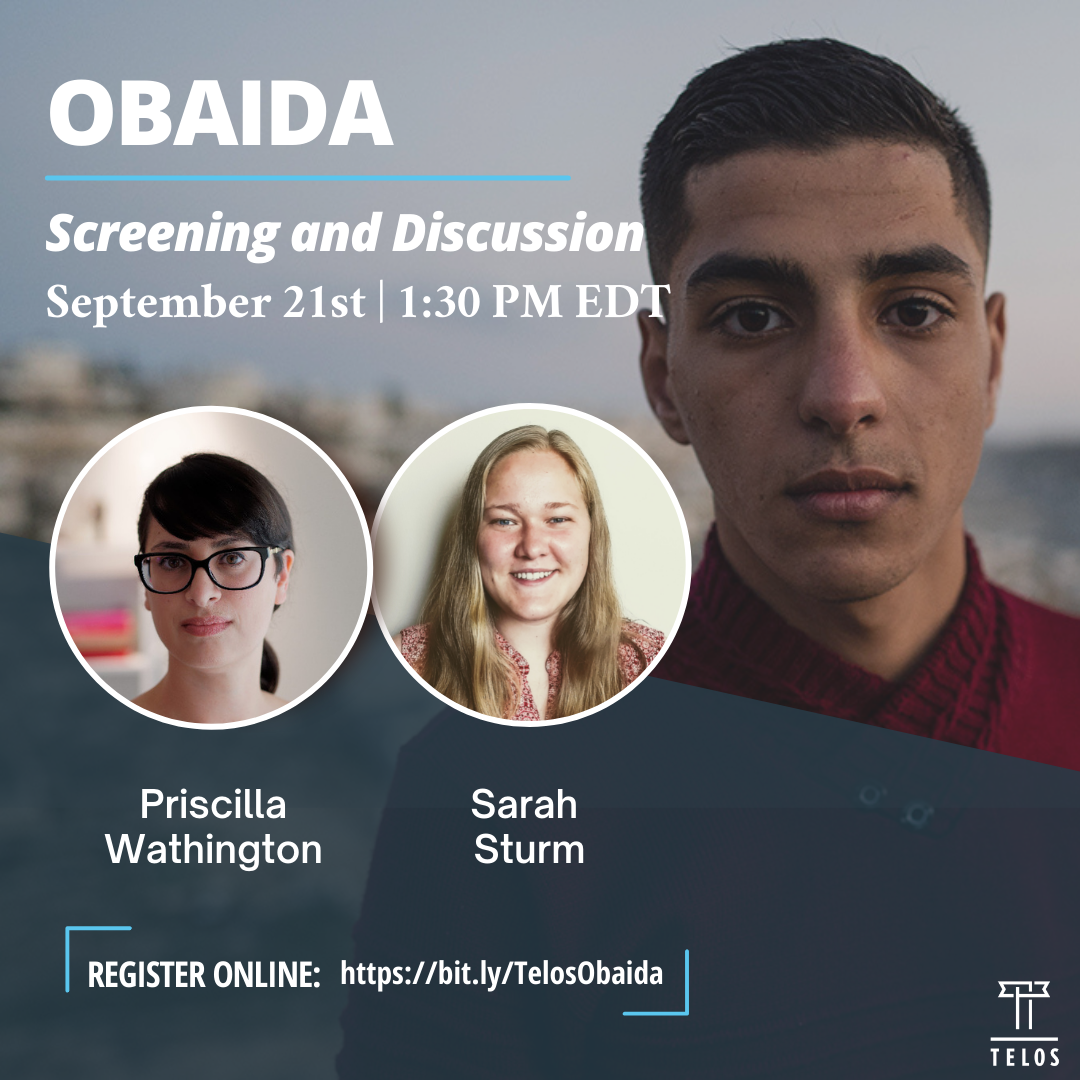 Under Israeli military law, Palestinian children can be detained for months on end, causing significant trauma to them and their families. The practice of child detention interrupts schooling, social formation, and affects youth well into adulthood. Every year, hundreds of Palestinian youth are detained in violation of their human rights.

Join us for a screening of the short film “OBAIDA,” which tells the story of 15-year old Obaida Jawabra and his experience of detention. Following the film will be a conversation and Q and A with Priscilla Wathington, former managing editor for Defence for Children Palestine, on the scope and impact of child detention.

Priscilla Wathington is a Palestinian American poet and human rights advocate who has worked with international and local West Bank NGOs such as War Child Holland, Norwegian Refugee Council and Defense for Children International – Palestine. Her debut poetry chapbook, “Paper and Stick,” which reckons with Israel’s militarized permit regime over Palestinian family life, is forthcoming in October 2021 with Tram Editions. 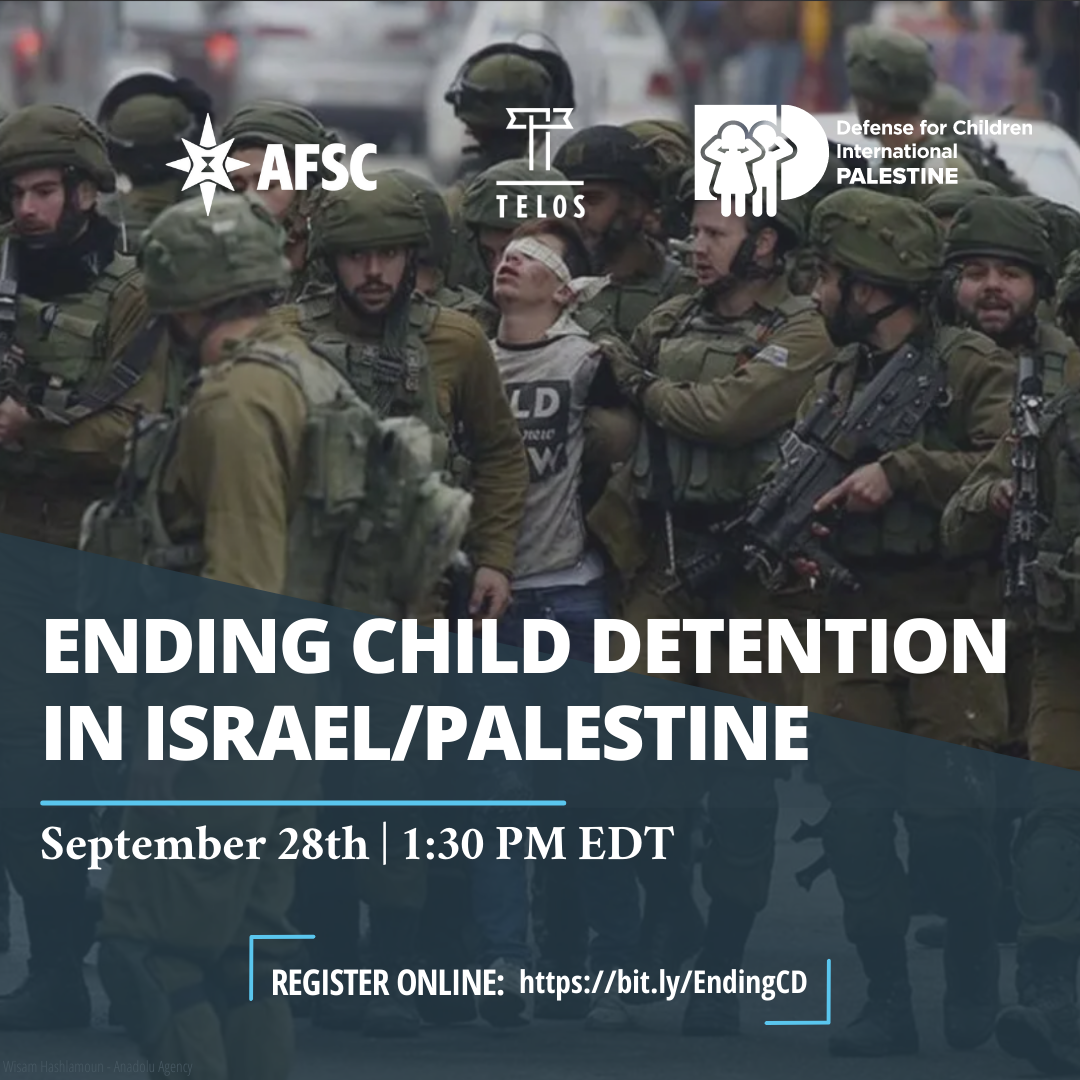 Join us in conversation with DCIP and AFSC as we discuss the scope of the practice of child detention, and the impact it has on Palestinian youth. We will also hear practical ways we can support the “No Way to Treat a Child” campaign, and discuss the role Americans can play in advocating for greater protection for Palestinian children.

Jennifer Bing has worked at American Friends Service Committee since 1989, serving in various capacities in its Israel-Palestine programs. She directs the AFSC Palestine Activism Program in Chicago and works with her colleagues in Palestine and Israel. Jennifer has organized hundreds of speaking tours, conferences, workshops, advocacy campaigns, and educational programs about the Middle East in her tenure with AFSC.

Shaina Low is a human rights activist and an advocacy officer with Defense for Children International – Palestine (DCIP), where she works to secure a just and viable future for Palestinian children in the occupied West Bank, including East Jerusalem and the Gaza Strip. She helps co-lead the No Way to Treat a Child campaign with the American Friends Service Committee.

Watch the short-film Obaida, screened during Part 1 of our Childhood Interrupted series 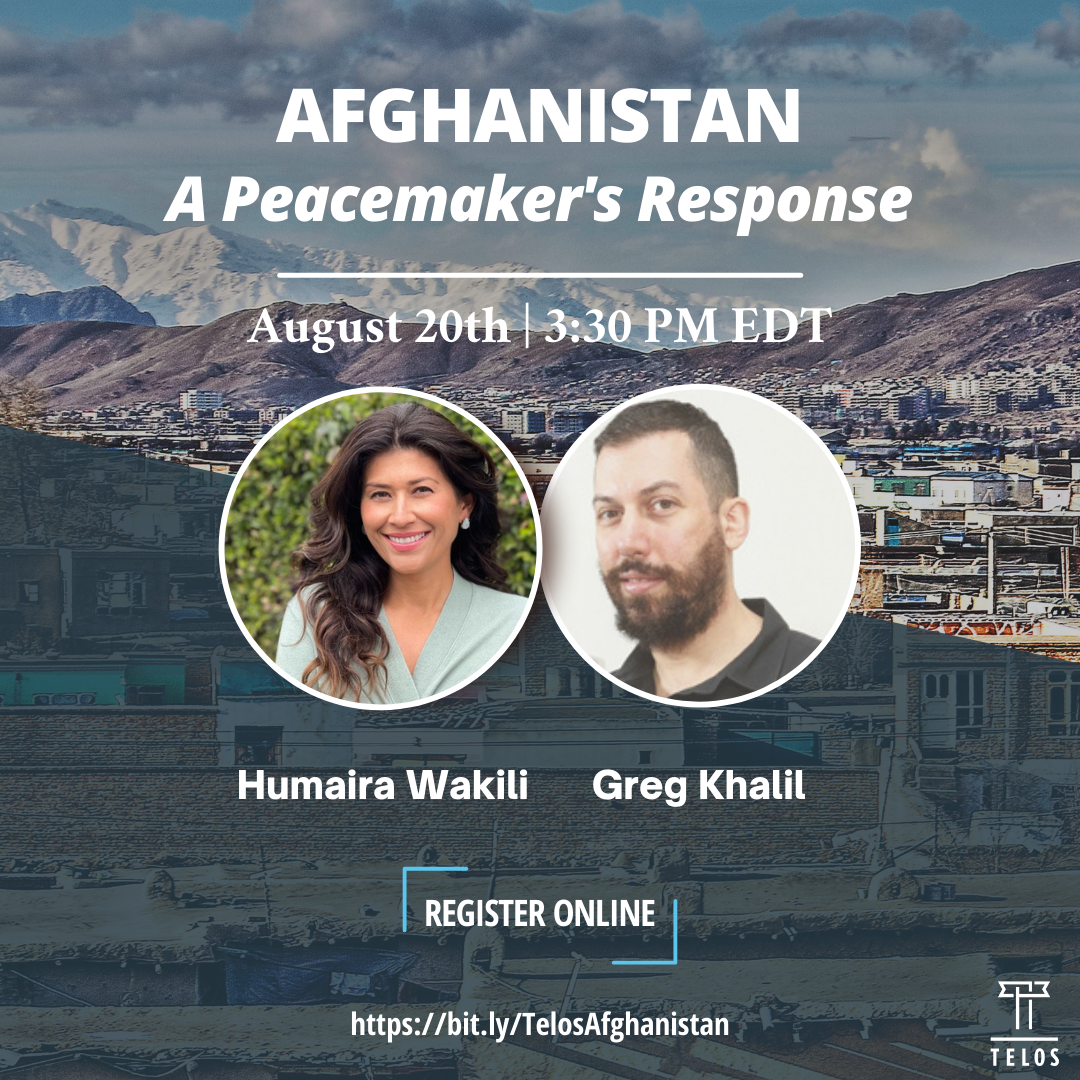 Events unfolding in Afghanistan have shocked and heartbroken the world. In a moment when everything feels overwhelming, we often ask, how should we even respond? One of the most important things we can do right now as peacemakers is listen to and center the marginalized voices who are closest to events.

Join us as we hear from Telos friend and former director of Tomorrow’s Youth Organization Humaira Wakili, on her story of peacemaking, which involved her fleeing Afghanistan as a refugee in childhood to returning later in life to work as an adult. She will share her story, reflections on what this development means for the Afghan people across the world, and direction for how peacemakers can respond.

Born in Kabul, Humaira and her family fled as refugees during the Soviet invasion of Afghanistan. Her father, a UN diplomat, relocated the family in New York where they lived until they were posted to Nigeria when she was 12 years old. For the next 15 years, her family traveled between the States and the African continent, calling both home.

After graduating from university in San Diego, Humaira gained experience at the top echelons of the U.S. Government through her international education work at the U.S. Agency for International Development and public diplomacy work at the agency overseeing Voice of America and Radio Free Asia. Leading initiatives in democracy development, Humaira supported political party development, assisted citizens to participate in government planning; worked to increase the role of marginalized groups in the political process – including women and youth across the Arab region. Humaira also participated in a high-level U.S delegation as an election observer in Afghanistan’s 2009 presidential election.

Humaira is a veteran of tech start-up Andela, where she led business expansion across Africa to accelerate the careers of thousands of software engineers. Before Andela, she was the director of Tomorrow’s Youth Organization, a non-profit in Palestine, investing in children and families living in conflict. 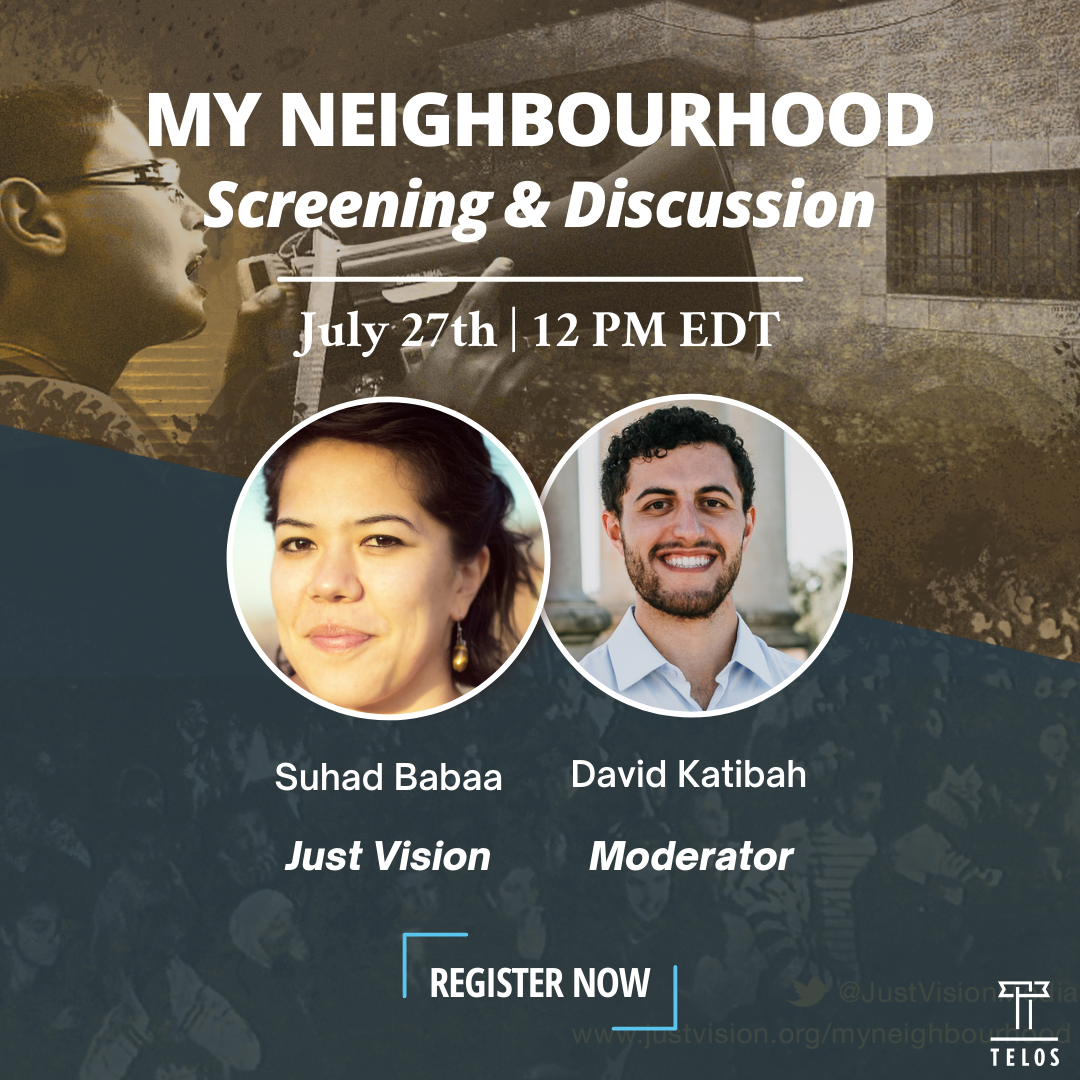 My Neighborhood Screening and Discussion

July 27th, 2021 | 12 PM EDT
In August, the fate of several Palestinian families living in the East Jerusalem neighborhood of Sheikh Jarrah will be decided—whether they will be able to stay in their homes, or be forcibly removed to make way for Jewish Israeli settlers.
The world’s attention has been focused on Sheikh Jarrah since this past May, but these families have been fighting to stay in their homes for much longer. In Just Vision’s compelling short-film, My Neighbourhood, they capture part of this story—one of ongoing struggle and unlikely collaboration, seen through the eyes of the young Mohammed El Kurd whose family still faces possible forced removal today.
Join us as we screen My Neighbourhood and hear from Just Vision’s Executive Director, Suhad Babaa. We’ll hear updates on the El Kurd family, connect the film back to what’s happening in Sheikh Jarrah today, and learn how Americans can support a just future for all in Israel/Palestine. 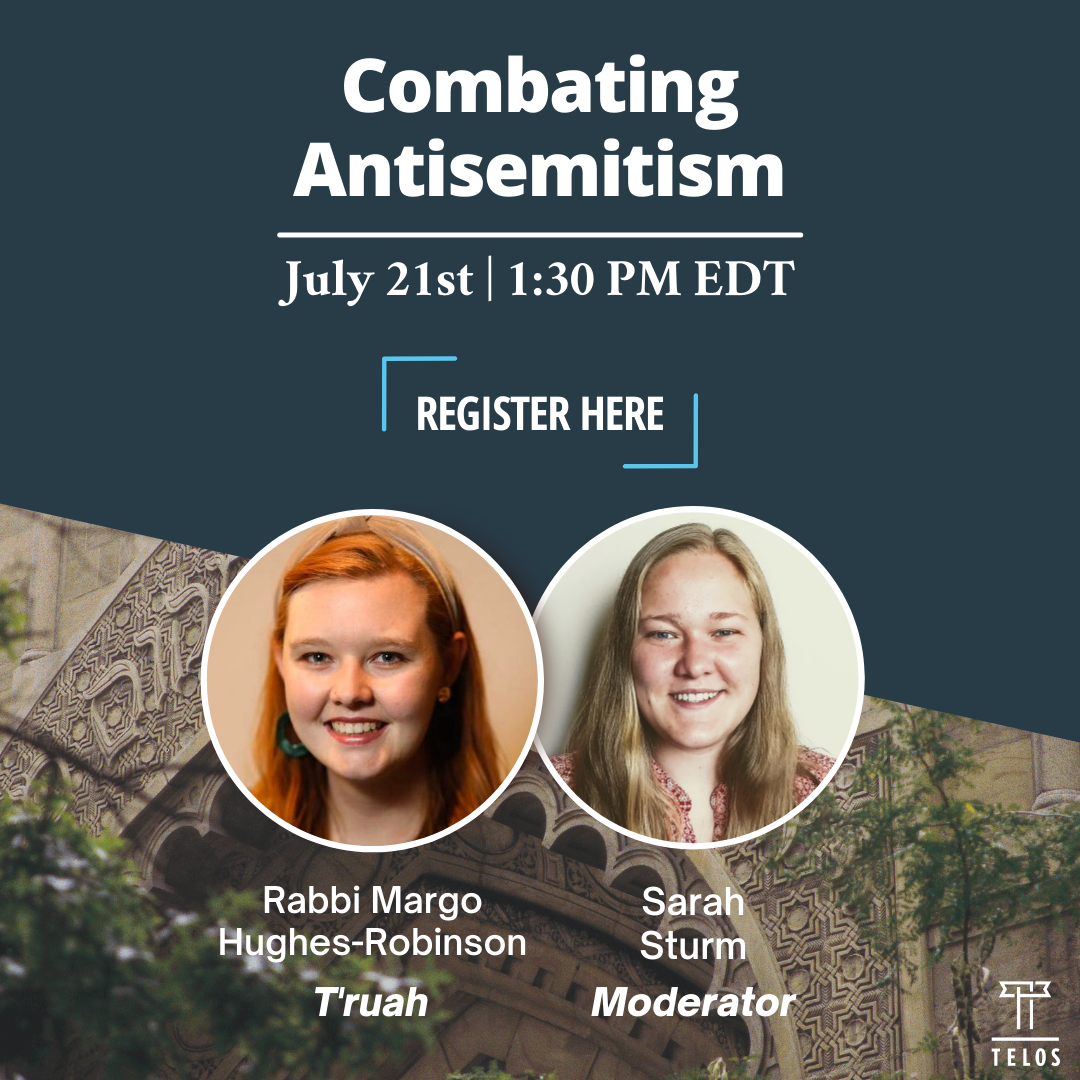 Combating Antisemitism: Where to Start

The United States and other nations across the world are experiencing a wave of antisemitic attacks. The need for all of us to stand in solidarity against such violence is great, but many of us don’t know where to begin: what exactly is antisemitism, and what can I do to combat it?

Join us for a conversation and training with Rabbi Margo Hughes-Robinson, the New York Rabbinic Organizer for T’ruah, a rabbinic human rights organization, on the basics of combating antisemitism. We will learn how to identify its different forms, explore our own implication both historically and today, and gain practical skills to help us actively and joyously combat it as peacemakers.

Rabbi Margo Hughes-Robinson was ordained by the Jewish Theological Seminary in 2021, where she also earned an MA in Midrash and served for two years as the Program Coordinator of the Milstein Center for Interreligious Dialogue. While in rabbinical school Margo served a number of communities and organizations, including as a Marshall T. Meyer Fellow at B’nai Jeshurun and as a T’ruah Israel Fellow in 2018.

Sarah Sturm attended Luther College where she studied Political Science and Religion. She graduated from Harvard Divinity School, focusing on religion, ethics and politics, with a particular interest in Israel/Palestine. A fervent believer in the power of citizen diplomacy, Sarah has spent time studying and working in both Jordan and Israel/Palestine. She is dedicated to conflict transformation through the disruption of assumptions and positive relationship building.