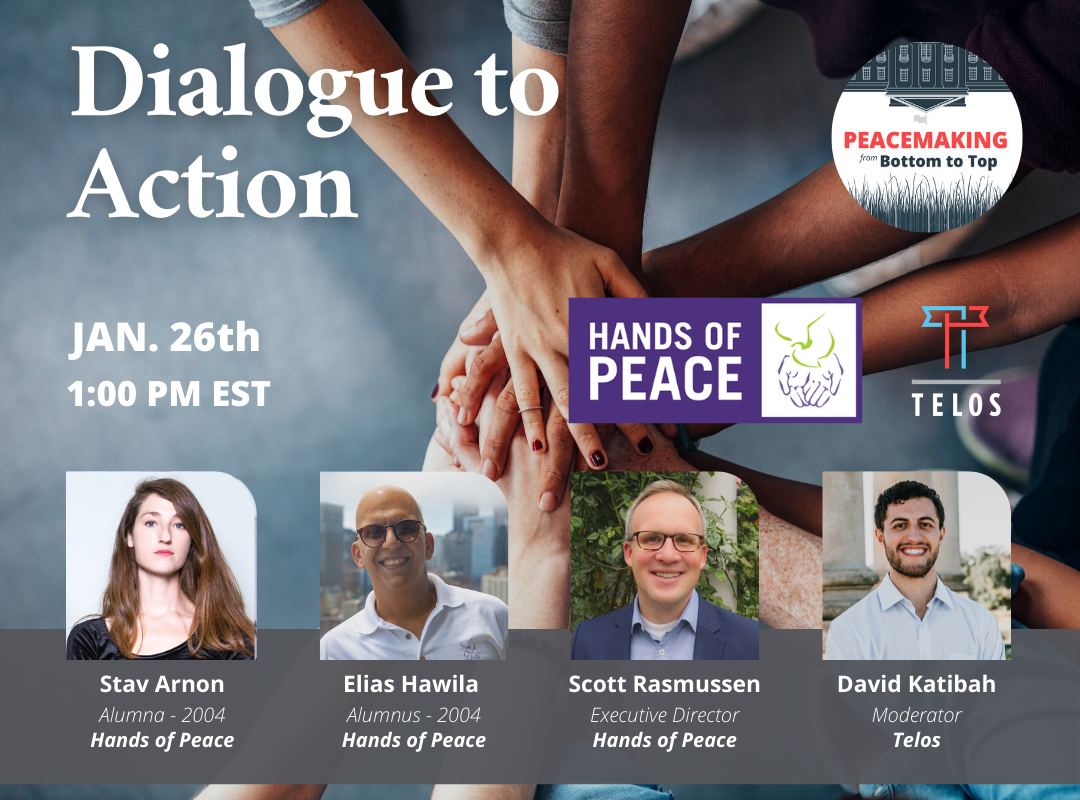 Peacemaking from Bottom to Top Part 1: Dialogue to Action

Grassroots movements that create spaces for dialogue and action across lines of difference form an essential building block of sustainable peace. What are the unique advantages and challenges to these efforts, and how do you create ethical frameworks that pursue open opportunities for exchange while also calling participants into action toward mutual flourishing that maximizes dignity, security, and freedom for all?

Join us to hear directly from Hands of Peace, a grassroots organization empowering American, Palestinian, and Israeli youth to become agents of change through immersive, dialogue-based summer programs in the U.S. We’ll hear firsthand how the program has shaped the lives and experiences of two alumni, Stav Arnon and Elias Hawila, and about the larger work of Hands of Peace from executive director Scott Rasmussen. Moderating will be Telos team member David Katibah. 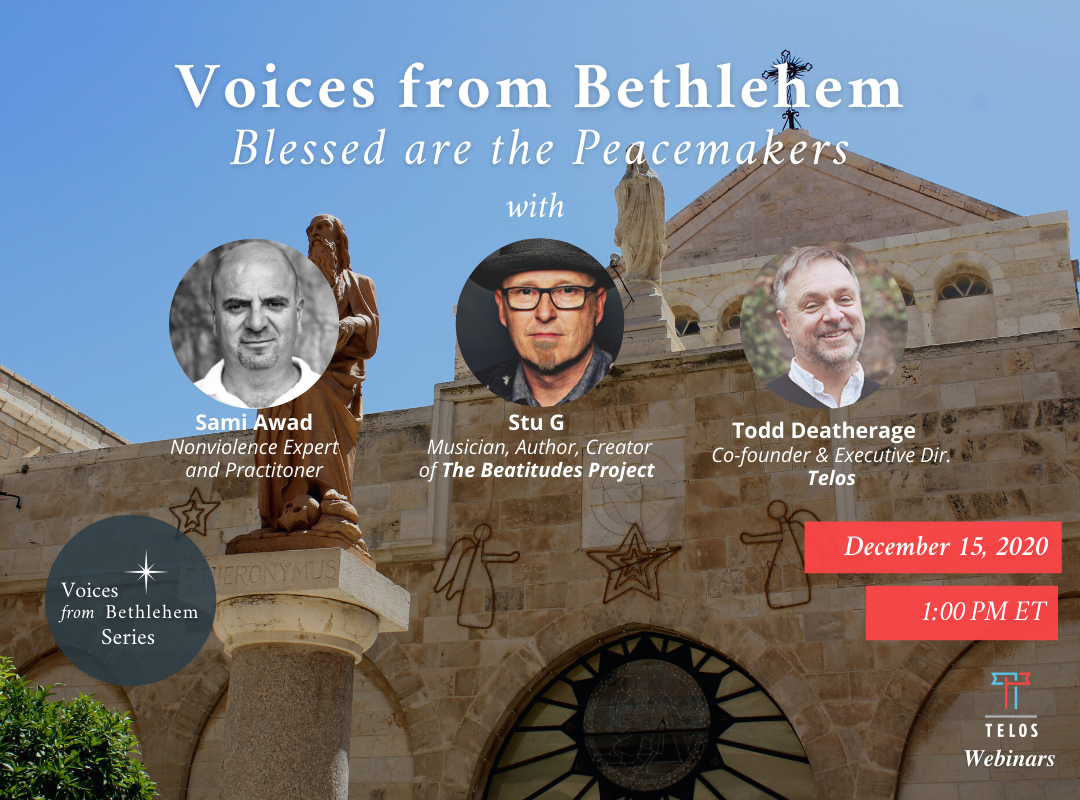 Voices from Bethlehem Part 2: Blessed Are the Peacemakers

In this Part 2, nonviolence expert and practitioner from Bethlehem, Sami Awad, along with musician, author and creator of The Beatitudes Project Stu G from Nashville, Tennessee will join us for a discussion centered on Jesus’ claim, “Blessed are the peacemakers.” 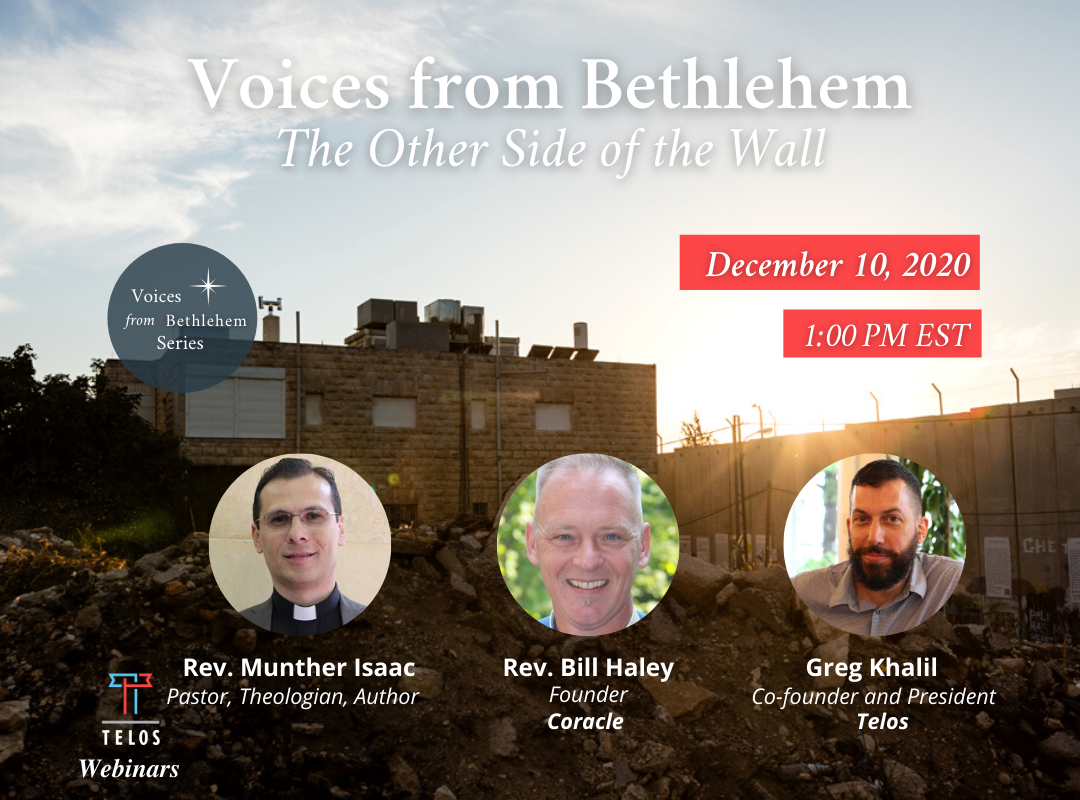 Voices from Bethlehem Part 1: The Other Side of the Wall

Join us in Centering the Leadership of the Marginalized (Practice 4) as we invite Rev. Dr. Munther Isaac, Palestinian theologian, author, and pastor of the Christmas Church in Bethlehem to share about his work in Bethlehem. Also joining us will be Rev. Bill Haley, founder of Coracle and co-founder of The Repentance Project.

We’ll discuss Rev. Isaac’s new book “The Other Side of the Wall,” which challenges theologies from the West that have been weaponized against him and others like him in the Holy Land. Telos co-founder and President Greg Khalil will moderate the conversation.

In our age of toxic polarization, we’re quick to make enemies of others and often fail to build meaningful relationships with those different from us, especially those from the “opposite side.” Yet relationships across lines of difference are at the core of peacemaking. Why are these relationships so important, and how can we practically begin to build them and overcome our contempt. Join us as we hear from an esteemed panel of peacemakers whose lives exemplify this difficult work.

On the panel will be Lisa Jernigan, co-founder of Amplify Peace, a global peacemaking movement, as well as Robi Damelin and Layla Alsheikh, Israeli and Palestinian mothers who have formed an unlikely friendship through their work building a reconciliation process in Israel/Palestine with the Parents Circle – Families Forum, an joint Israeli and Palestinian organization of bereaved families. Moderating the discussion will be Telos Co-founder and Executive Director, Todd Deatherage. 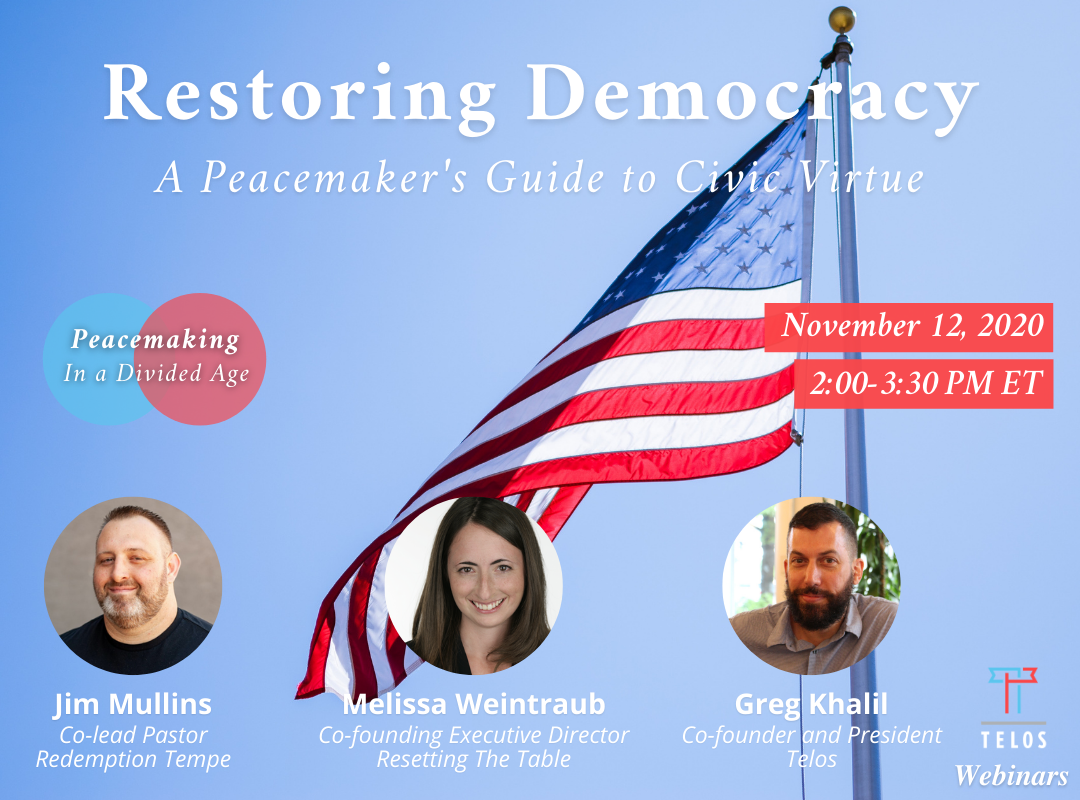 Democratic norms and common civic virtue feel more strained than ever before, but we know the damage of this season need not be permanent. Peacemakers recognize the opportunity and agency they have to write a new story in their community and across our nation. In our post-election world, what will it take for peacemakers to restore democracy and establish a shared life under common values, a life where we all have a seat at the table.

Join us as we ask these questions and hear from peacemakers Melissa Weintraub, Jim Mullins, and Greg Khalil. Melissa will share about her work building dialogue and deliberation across political divides as the co-founding Executive Director of Resetting the Table, and Jim Mullins will share about his experiences building civic virtue in his community and through the peacemaking community he co-founded, Peace Catalyst International. Telos co-founder and President Greg Khalil will moderate the discussion. 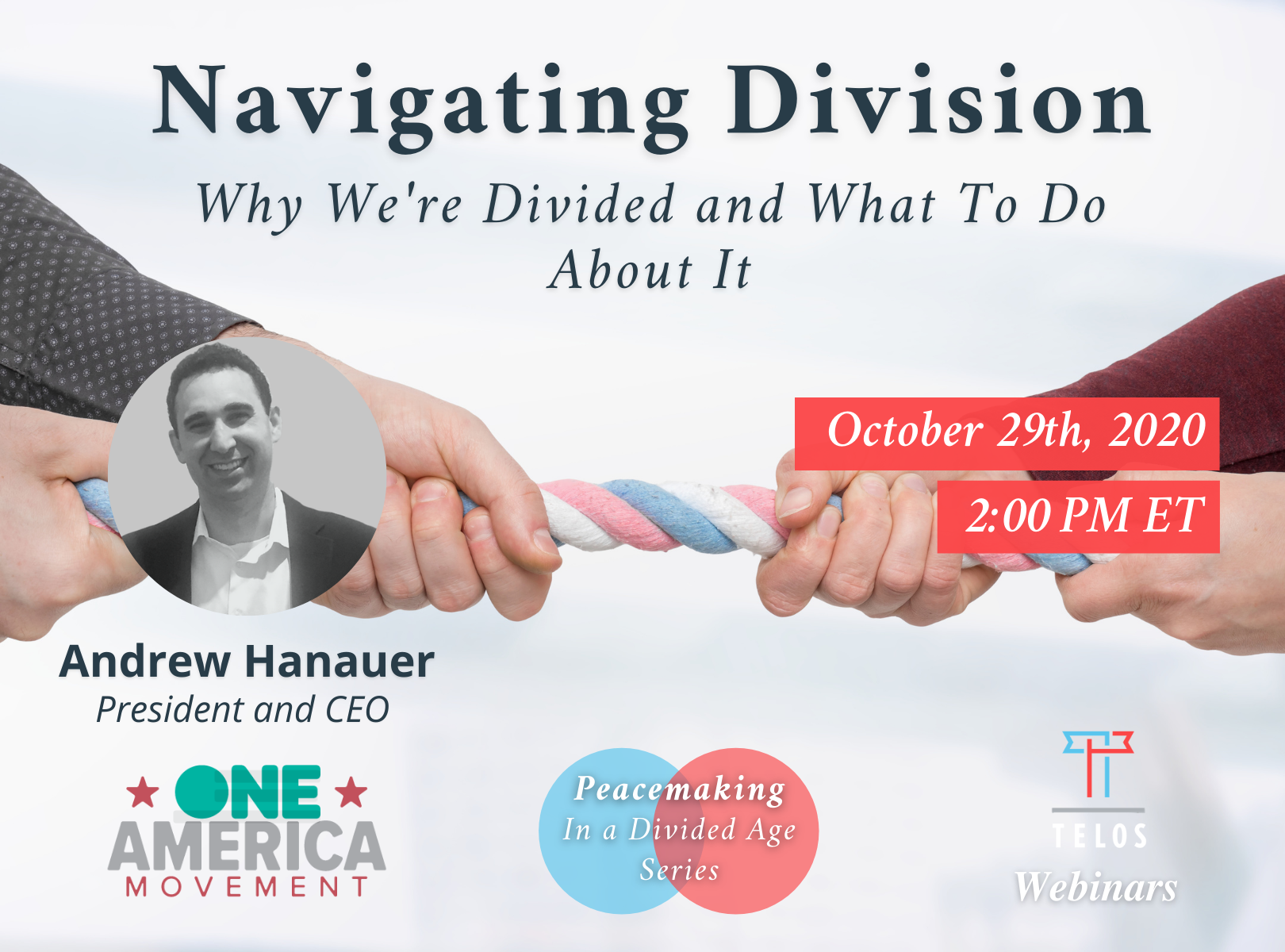 Navigating Division: Why We're Divided and What We Can Do About It

It’s no secret that our nation is divided. Each of us has felt it in our communities, places of worship, and even families. We’re quick to define ourselves by the group we’re in and refuse to listen to those outside. But when we do so, we lose the opportunity to collaborate for the common good and secure a shared future for all.
What’s behind our tendency to divide, and what can we do about it? Join us as we hear from Andrew Hanauer, President and CEO of the One America Movement. Andrew will walk us through the neuroscience of division, and offer practical steps on how to have tough conversations that lead us to joint action. 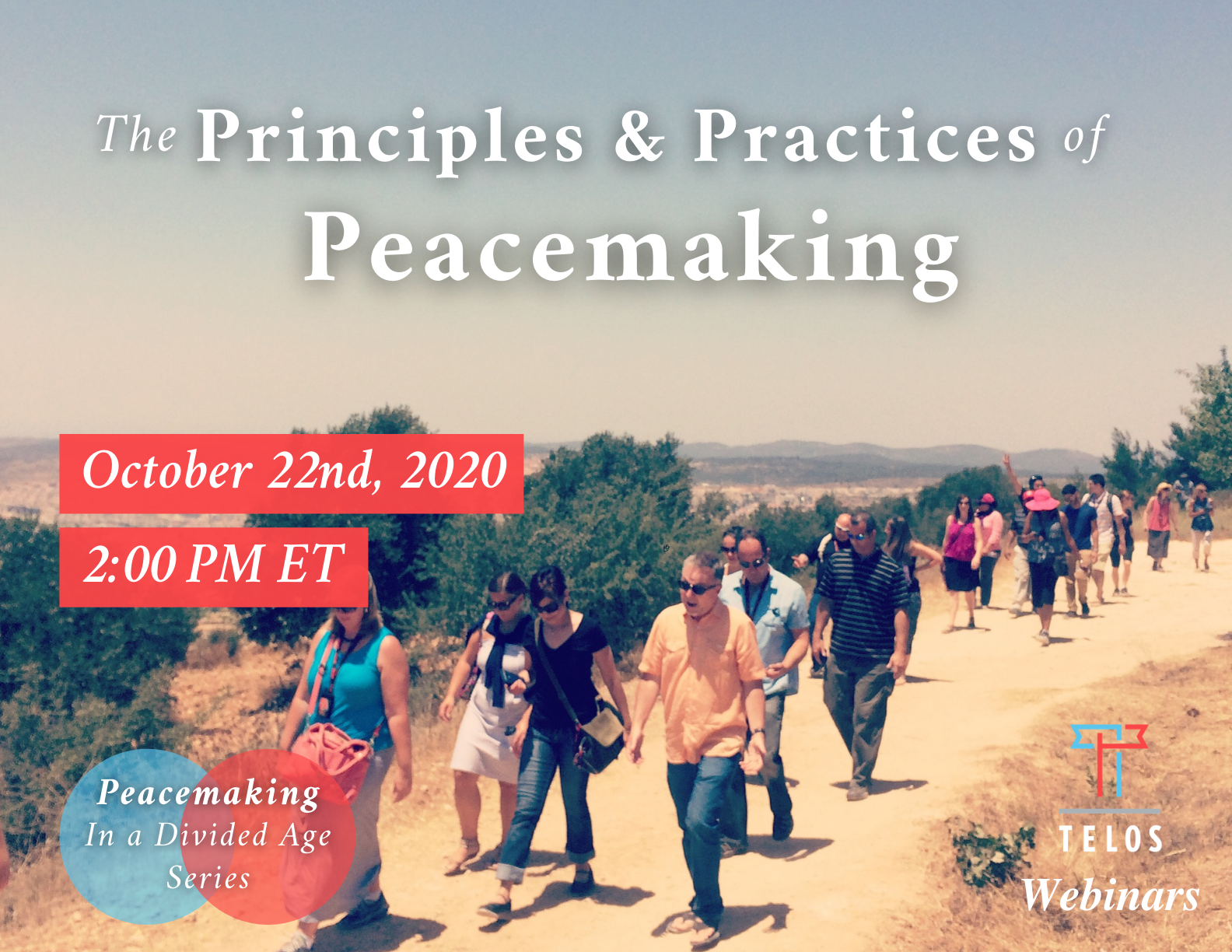 The Principles and Practices of Peacemaking

We know that our nation is at a crossroads. Discord, injustice, and mistrust have taken center stage. But we believe there’s an alternative way, one that secures a future for all and unites us with common purpose. How do we walk it?
Join us for an interactive webinar on the Principles and Practices of Peacemaking, our guide to engaging in this divided age and beyond.  We’ll walk through the core principles of peacemaking—what it means, what it requires, and where it takes us—and follow with a training on the practices that get us there, that immerse in conflict for the sake of healing. 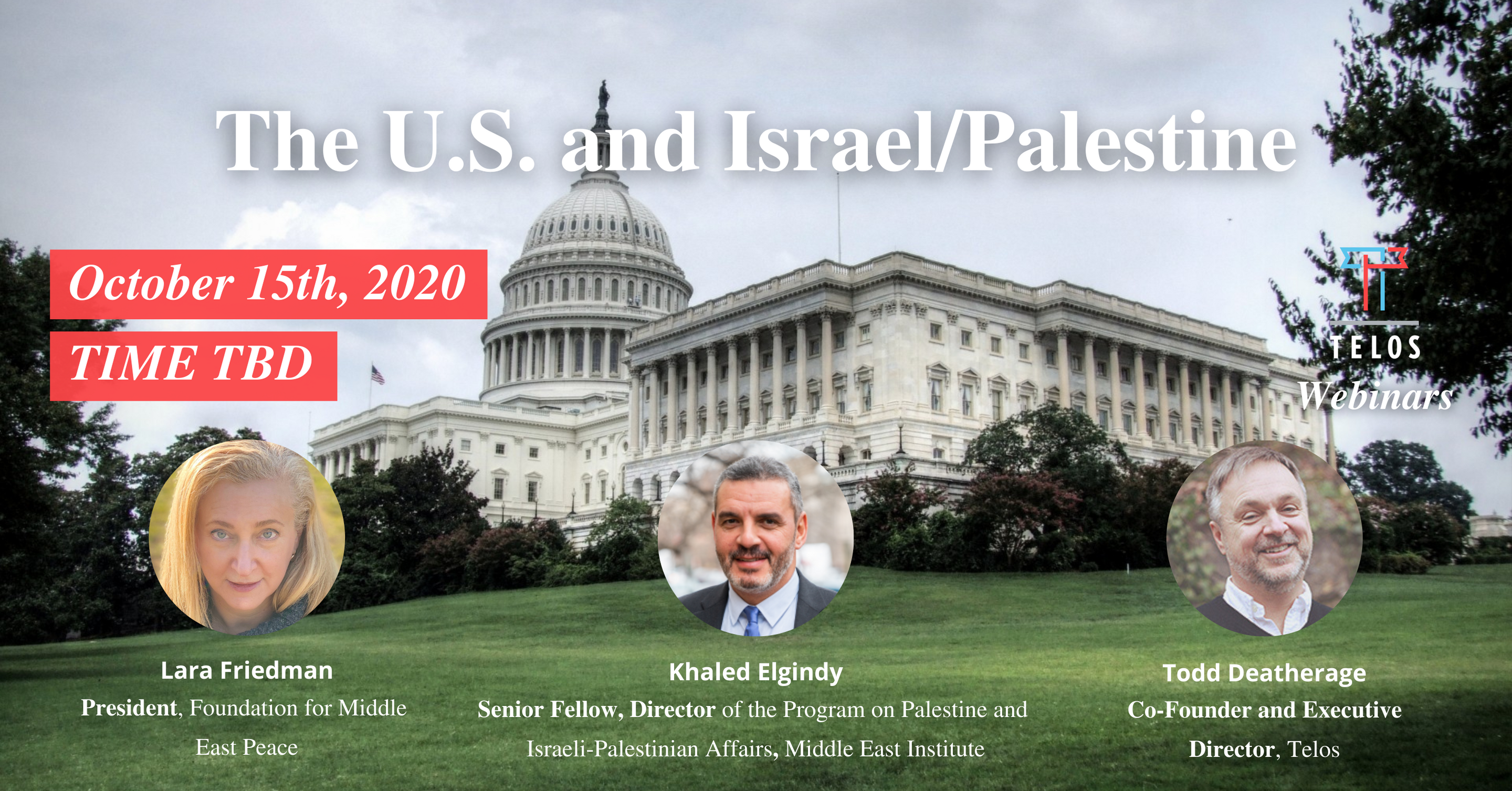 What's at Stake: Israel/Palestine and the US Election

With the US presidential election just a few weeks away, we talked to the nation’s experts on the historic influence of US policy on Israel/Palestine, the Trump Administration’s record on the region, and what the election could mean for our partners on the ground and prospects for peace in Israel/Palestine. Speakers included president of the Foundation for Middle East Peace Lara Friedman, Senior fellow at the Middle East Institute Khaled Elgindy, and Telos co-founder and executive director Todd Deatherage

Speakers:
Lara Friedman is the president of the Foundation for Middle East Peace and a former U.S. Foreign Service Officer. With more than 25 years working in the Middle East foreign policy arena, Friedman is a leading authority on U.S. foreign policy in the Middle East, with particular expertise on the Israeli-Arab conflict, Israeli settlements, Jerusalem, and the role of the U.S. Congress. She is published widely in the U.S. and international press and is regularly consulted by members of Congress and their staffs, by Washington-based diplomats, by policy-makers in capitals around the world, and by journalists in the U.S. and abroad.
Khaled Elgindy is a Senior Fellow at the Middle East Institute and the author of Blind Spot: America and the Palestinians, from Balfour to Trump. Elgindy previously served as a fellow in the Foreign Policy program at the Brookings Institution from 2010 through 2018. Prior to arriving at Brookings, he served as an adviser to the Palestinian leadership in Ramallah on permanent status negotiations with Israel from 2004 to 2009, and was a key participant in the Annapolis negotiations of 2007-08. Elgindy is also an adjunct instructor in Arab Studies at Georgetown University.
Todd Deatherage spent sixteen years in senior positions in the legislative and executive branches of the U.S. government before co-founding the Telos Group. He is a native Arkansan and a graduate of the University of Arkansas. He began his career as an educator. He and his family live in Fairfax County, Virginia.